Myelodysplastic syndrome (MDS) is clonal stem cell disorder which is defined by morphological dysplastic changes and ineffective hematopoiesis. In line with these clinical features of the disease, MDS stem cells along with the hematopoietic progenitors and mature cells are inherently impaired, as demonstrated by inefficient growth ex vivo and poor engraftment in immune-compromised mice. Dysregulation of innate immune signaling pathway as well as systemic inflammation have been implicated in various myeloid malignancies including MDS. Chronic inflammation mediated by various cytokine exposures or TLR stimulations is well-understood to be harmful to hematopoietic stem cell function, which appears to account for inherent impairment of MDS stem cells. However, MDS cells outcompete normal hematopoiesis in MDS patients' bone marrow. This paradox of MDS pathogenesis has long been an unresolved mystery, and has hindered the development of novel therapies that reduce the MDS clone size and rescue the suppressed normal hematopoiesis. In this seminar, I will talk about the adoptive response of MDS stem cells to inflammatory milieu, which provides an explanation for the discrepancy between clonal dominance of MDS stem cells and their functional impairment in the bone marrow. I will also present our evidence on tumor suppressive function of innate immunity in myeloid malignancies, which may imply that pre-leukemic cells need to evade the effect of the inflammatory milieu for the transition to frank leukemia. 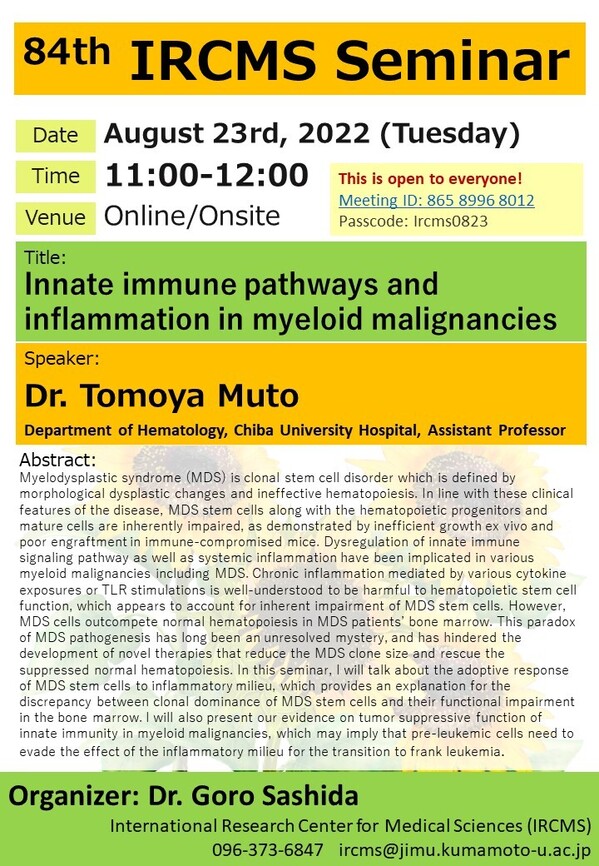