We would like to inform you that the 50th IRCMS Seminar has been scheduled as below. We would be pleased to see many of you participating in the seminar.

Stem cells maintain the tissue integrity during homeostasis and show remarkable plasticity to quickly respond to various stress or damages of the tissue. Dysfunction or misregulation of stem cells leads to tissue dysfunction, including impaired wound healing, cancer and aging.A classical model predicts that tissue stem cells divide less frequently than their immediate daughter, so called transit-amplifying cells, to protect themselves from accumulating genetic mutations, tumorigenesis and aging. Contradicting to this model, our previous study proposed the co-existence of two distinct stem cell populations - slow-cycling and fast-dividing stem cells - in the mouse epidermis, which can renew themselves and produce differentiation lineages, and differs in their molecular profiles and spatial territories1). These two populations of stem cells exist not only in the skin epidermis, but also in other epithelial tissues, such as oral and eyes. We identified an extracellular matrix protein Fibulin-7, as a potential regulator to define the territorial segregation of distinct stem cell populations in the epidermis. With the discovery of two populations of stem cells in the epidermis, it remains elusive how they work together to maintain the tissue in a long run and what is the biological significance of having heterogeneous stem cell populations within the same tissue. Considering that fast-dividing stem cells experience three times more divisions than slow-cycling ones over the entire life span, they may lose their stem cell ability prematurely or cause malignant transformation due to life-long, repeated cell divisions. Our recent study supports this hypothesis, indicating that slow-cycling and fast-dividing stem cells may react differently to aging2). Our work will reveal the cellular and molecular mechanisms of stem cell aging in epithelial tissues, with implications for applications in regenerative therapy and for future treatments of age-related disorders, including cancer. 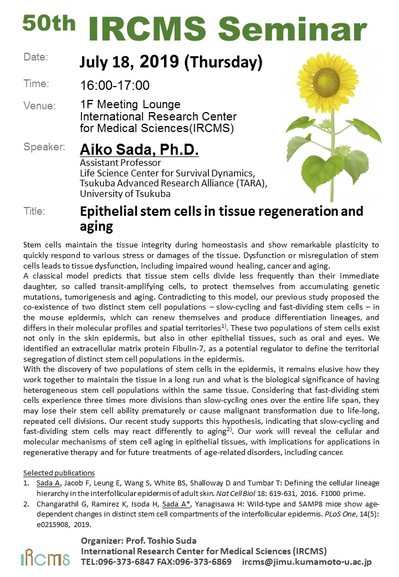