We would like to inform you that the 39th IRCMS Seminar has been scheduled as below. We would be pleased to see many of you participating in the seminar.

Hematopoietic stem cells (HSCs) are maintained in specific niches whose identities have been the subject of intense studies.  Conditional genetic deletion of stem cell factor (SCF) or CXCL12 in stromal cells revealed specialized function of perivascular cells associated with arterioles (Nestin-GFPHI NG2+) compared to those that are broadly distributed (Nestin-GFPLO Lepr+) in the bone marrow. The arteriole-associated niche promotes HSC quiescence in that the depletion of NG2+ stromal cells shifts HSCs away from arterioles and increases HSC proliferation. Megakaryocytes (MK), which are broadly distributed in the bone marrow, also promote HSC quiescence via CXCL4 (also called PF4) secretion.  Recent studies using mice expressing GFP under the von Willebrand factor (vWF) promoter that marks platelet and myeloid-biased HSCs, have revealed a significant association of vWF+ HSCs with MK.  In addition, genetic depletion of peri-arterial stromal cells or MKs suggests that these two niches selectively regulate vWF- and vWF+ HSCs, respectively. Thus, lineage-biased HSC subsets are not randomly distributed in the bone marrow but regulated by distinct niches. It is notable that nerves from the sympathetic nervous system (SNS) associate almost exclusively with arterioles.  SNS nerves control the circadian expression of CXCL12, leading to oscillations in the release of HSCs from the bone marrow. Our recent studies show that arteriole endothelial cells also express much higher levels of niche factors (SCF, CXCL12 and others) than sinusoidal endothelial cells. Selective deletion of SCF in arteriole endothelial cells (AEC) or sinusoid endothelial cells (SEC) reveals that HSC numbers are reduced when SCF is deleted in AEC, but not in SECs, further supporting the arteriole niche concept.  During aging, the circadian oscillation of HSC is disrupted and the bone marrow undergoes dramatic changes, including the loss of arteriolar structures, and increased numbers of mesenchymal stem cells with reduced function.  In addition, SNS nerves degenerate with aging. We will present data indicating that the aging-associated nerve degeneration contributes to the aging manifestations of the HSC niche, including disrupted circadian HSC migration, lineage bias, and reduced repopulating capacity. We will also discuss a novel approach to revitalize HSC niche ex vivo using genetic reprogramming. 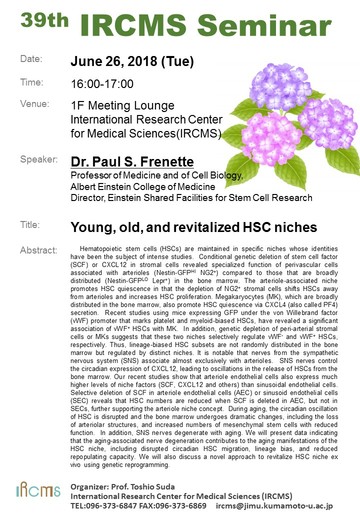