"Engineering biogenesis of human platelets by a newtype of bioreactor system"

Abstract: Platelet transfusion therapy often needs repetitive treatment into a patient with a 10 Units (2 x 1011 platelets/ 200 ml package). Given that a patient suffering from thrombocytopenia would need 10 Units platelets transfusion twice per week, we should consider the strategy of huge ex vivo platelet production system rather than 'culture dish' (i.e., at least, 4-5 x 1011 platelets per week for a patient).Alternative issue in platelet transfusion exists in mixed HLA and/or HPA (human platelet antigen)-expressing platelets from different donors in general transfusion system, which mostly causes platelet transfusion refractoriness (PTR). PTR is the phenomenon of NO responses in a rise of platelet count after several transfusion(s) caused by the anti-HLA and/or anti-HPA antibodies in patients.To address the problems, we propose the combined idea composed by iPS cell technology and a self-renewing megakaryocyte cell line that enables expansion of megakaryocytes, producer cells of platelets. Next question is how can we succeed in large scaled expansion of megakaryocytes accompanied by functional platelet yields? Key points exist in in vivo circumstances in terms of platelet release. Communication between in vivo and in vitro should enable to develop bioreactor system for obtaining functional platelets with high efficiency.

Abstract: Myelodysplastic syndromes are a heterogeneous group of chronic myeloid neoplasms Gene mutations play a critical role in their pathogenesis and recent genome sequencing studies have delineated a full spectrum of common mutations involved in the development and progression to MDS. However, the origin of clones initiating these processes and their chronological behavior before the onset of the disease are largely unknown. To address this issue, we analyzed a set of samples serially collected during the course of immune-mediated aplastic anemia (AA), which is predisposed to MDS but by itself is not a neoplastic disease, using whole exome and targeted capture sequencing of the major mutational targets in MDS. We found about 1/3 of the patients with AA showed clonal hematopoiesis evidenced by mutations commonly found in MDS, the majority of which was also confirmed in the diagnostic AA samples. Among these mutations most prevalent were DNMT3A, ASXL1, BCOR/BCORL1, and PIGA mutations. Mutations showed a typical age-related signature and the frequency and the mean number of mutations increased with age. Chronological dynamics of these clones was highly variable but DNMT3A, ASXL1, and other mutations tended to expand their clone size, while that of PIGA and BCOR/BCORL1 were more likely to decrease. Progression to MDS or AML frequently was accompanied by newly acquired mutations and their expansion since long before the onset of MDS/AML. Our results provide a novel insight into the clonal origin of MDS and may help prediction of the onset of MDS in AA patients and guide therapy. 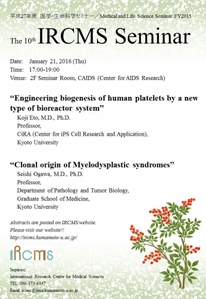 Remarks: This seminar will be held in English. Pre-registration is not required.