Hematopoietic stem cells (HSCs) are produced from the blood vessel walls and circulate in the blood during the perinatal period. However, the migration dynamics of how HSCs enter the bone marrow remain elusive. To observe the dynamics of HSCs over time, the present study develops an intravital imaging method to visualize bone marrow in neonatal long bones formed by endochondral ossification which is essential for HSC niche formation. Endogenous HSCs are labeled with tdTomato under the control of an HSC marker gene Hlf, and a customized imaging system with a bone penetrating laser is developed for intravital imaging of tdTomato-labeled neonatal HSCs in undrilled tibia, which is essential to avoid bleeding from fragile neonatal tibia by bone drilling. The migration speed of neonatal HSCs is higher than that of adult HSCs. Neonatal HSCs migrate from outside to inside the tibia via the blood vessels that penetrate the bone, which is a transient structure during the neonatal period, and settle on the blood vessel wall in the bone marrow. The results obtained from direct observations in vivo reveal the motile dynamics and colonization process of neonatal HSCs during bone marrow formation. 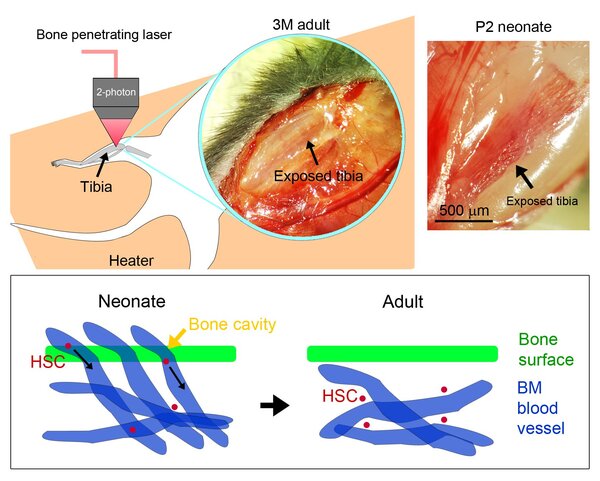