• Molecular phylogenetic analyses reveal the presence of NPAS4L and ETV2 in various vertebrate clades, with NPAS4L lost in mammals and ETV2 lost in birds

• An NPAS4L, but not ETV2, ortholog is present in the chicken (G. gallus) genome and is involved in hemangioblast formation

• It is proposed that in ancestral amniote and ancestral reptile, the zebrafish scenario (both

NPAS4L and ETV2 genes are present, with NPAS4L functioning upstream of ETV2) is the default mode of hemangioblast specification

Vertebrate primitive hematopoietic and vascular development is regulated by a conserved set of transcription factors. Their common precursors, the hemangioblasts, express Stem cell leukemia/T-cell acute lymphoblastic leukemia 1 (SCL/TAL1)  and Lim only protein 2 (LMO2) in all vertebrate groups examined. Hemangioblast specification from nascent mesoderm was reported to be less conserved, with Ets variant 2 (ETV2) and Neuronal PAS domain containing protein 4-like (NPAS4L) identified as its master regulator in mammals and zebrafish, respectively. We show here that the ortholog of NPAS4L, but not of ETV2, is present in the avian genome. Chicken NPAS4L is expressed in hemangioblasts prior to SCL/TAL1 and LMO2. CRISPR-on mediated ectopic expression of endogenous NPAS4L leads to ectopic SCL/TAL1 and LMO2, as with ectopic expression of zebrafish NPAS4L. We propose that the ancestral amniote genome had both NPAS4L and ETV2 genes. The ETV2 gene was lost in the avian lineage without affecting direct transcriptional regulation of SCL/TAL1 and LMO2 by NPAS4L. The NPAS4L gene was lost in the mammalian lineage, with its roles partially replaced by ETV2. 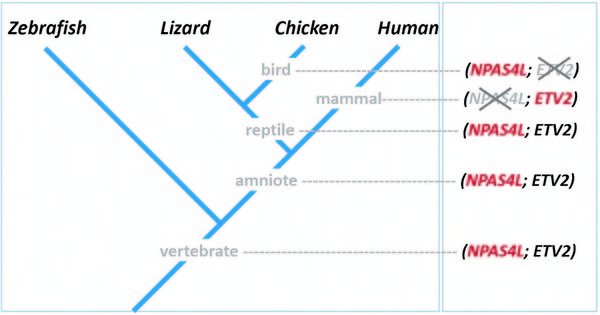