A key mechanism of persistent and latent HTLV-1 infection.

The first evidence of an ectopic CTCF-binding site generated by the integration of an exogenous retrovirus.

HTLV-1 is a retrovirus that causes leukemia of infected cells in humans. It integrates into the host cellular genomic DNA and remains in the form of proviral DNA. There are two long terminal repeats (LTR) at both ends of the provirus. Several viral genes are encoded in both strands of the provirus, such as tax in the plus strand, and HTLV-1 bZIP Factor (HBZ) in the minus strand.  The HBZ gene is constitutively expressed from the promoter in the 3'LTR, whereas plus-strand expression from 5'LTR required for viral propagation to uninfected cells is, in most settings, suppressed to escape from the host immune surveillance in vivo.  However, the mechanism for such a distinctive transcriptional pattern within just 9kb proviral genome was unknown.

We have identified in this study that CTCF, an insulator-binding protein of the host cell, directly binds to HTLV-1 provirus. CTCF protein is known to be a key molecule involved in the organization of higher order chromatin structure of the human genome.  The CTCF binding and a clear epigenome border were detectable not only in cell lines but also in fresh peripheral blood samples of ATL patients, suggesting that this mechanism should play a crucial role in the viral persistence and pathogenesis in HTLV-1 infection. 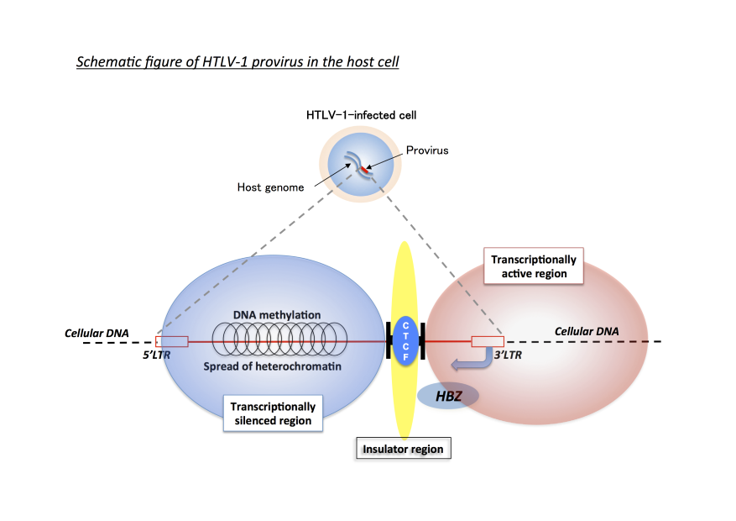