The effect of antiretroviral drug resistance mutations on cytotoxic T lymphocyte (CTL) recognition has been analyzed in HIV-1 subtype B infections, but it remains unclear in infections by other HIV-1 subtypes that are epidemic in countries where antiretroviral drugs are not effectively used. We investigated the effect of nonnucleoside reverse transcriptase (RT) inhibitor (NNRTI)-resistance mutations (Y181C, Y181I, and Y181V) on epitope recognition by CTLs specific for 3 different HIV-1 epitopes (HLA-A*02:01-restricted IV10, HLA-B*35:01-restricted NY9, and HLA-C*12:02-restricted KY9) in subtype B and subtype A/E infections and the accumulation of these mutations in treatment-naive Japanese and Vietnamese. These NNRTI-resistance mutations critically affected NY9-specific and KY9-specific T cell responses in the subtype B infections, whereas they showed a different effect on IV10-specific T cell responses among the subtype B-infected individuals. These mutations affected IV10-specific T cell responses but weakly affected NY9-specific T cell responses in the subtype A/E infections. The substitution at position 3 of NY9 epitope which was found in the subtype A/E virus differently influenced the peptide binding to HLA-B*35:01, suggesting that the differences in peptide binding may result in the differences in T cell recognition between the subtype B virus and A/E virus infections. The Y181C mutation was found to be accumulating in treatment-naive Vietnamese infected with the subtype A/E virus. The present study demonstrated different effects of NNRTI-resistance RT181 mutations on CTL responses between the 2 subtype infections. The Y181C mutation may influence HIV-1 control by the CTLs in Vietnam, since this mutation has been accumulating in treatment-naive Vietnamese. 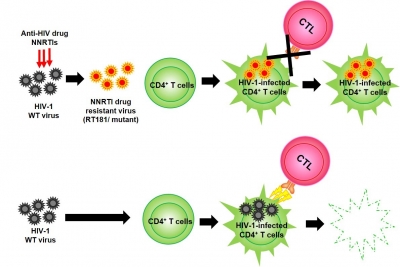